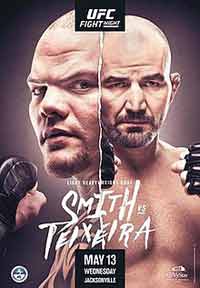 Review by AllTheBestFights.com: 2020-05-13, pretty good fight between Ray Borg and Ricky Simon: it gets three stars.

Ray Borg entered this fight with a professional record of 13-4-0 (54% finishing rate) and he is ranked as the No.31 bantamweight in the world. He lost two consecutive bouts between 2017 and 2019, against Demetrious Johnson (Demetrious Johnson vs Ray Borg) and Casey Kenney, but then he has beat Gabriel Silva and Rogerio Bontorin (Ray Borg vs Rogerio Bontorin).
His opponent, Ricky Simon, has a mma record of 15-3-0 (47% finishing rate) and he entered as the No.33 in the same weight class. He fought three times last year beating Rani Yahya (Rani Yahya vs Ricky Simon) and losing to Urijah Faber (Urijah Faber vs Ricky Simon) and Rob Font. Borg vs Simon is on the undercard of Anthony Smith vs Glover Teixeira – UFC Fight Night 171 (also known as UFC on ESPN+ 29). Watch the video and rate this fight!