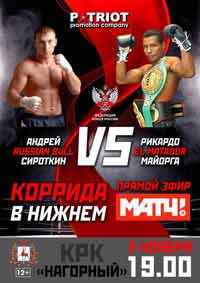 Review by AllTheBestFights.com: 2017-11-03, some good exchanges between Andrey Sirotkin and Ricardo Mayorga but it is not enough to get three stars, it gets two.

The undefeated Andrey Sirotkin entered this fight with a perfect boxing record of 13-0-0 (3 knockouts) and he is ranked as the No.29 super middleweight in the world while his opponent, the former world champion in two different weight classes Ricardo Mayorga, has an official record of 32-9-1 (26 KOs=81%). Sirotkin has already fought twice in 2017 defeating Dilmurod Satybaldiev and Geard Ajetovic while ‘El Matador’ Mayorga has fought and won once, against Jaudiel Zepeda; before this bout he had lost to Shan Mosley in 2015 (=Mosley vs Mayorga 2). Sirotkin vs Mayorga is valid for the vacant WBA International super middleweight title. Watch the video and rate this fight!