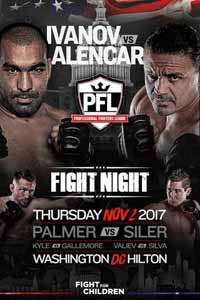 Review by AllTheBestFights.com: 2017-11-02, boring fight between Blagoy Ivanov and Caio Alencar: it gets one star!

The black belt in judo and former world combat sambo champion Blagoy Ivanov entered this fight with a professional mma record of 15-1-0 (80% finishing rate) and he is ranked as the No.17 heavyweight in the world. ‘Baga’ Ivanov suffered his only loss when he faced Alexander Volkov in 2014 (final of the Bellator Hw tournament – season ten – Volkov vs Ivanov), after this bout he has won four consecutive fights beating Josh Copeland (=Ivanov vs Copeland) and Shawn Jordan in his last two (=Ivanov vs Jordan).
His opponent, Caio Alencar, has an official record of 11-1-0 (91% finishing rate) and he entered as the No.29 in the same weight class. ‘Caiao’ Alencar lost to William Baldutti in 2013 but then he has won four bouts defeating Jared Rosholt in his last one. Ivanov vs Alencar is the main event of PFL Fight Night (Professional Fighters League). Watch the video and rate this fight!