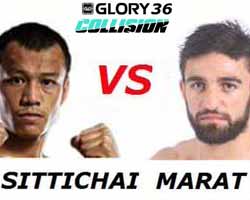 Review by AllTheBestFights.com: 2016-12-10, close fight but not so exciting: Sitthichai Sitsongpeenong vs Marat Grigorian 3 gets two stars.

The Glory Lw and former Lumpinee Ww champion Sitthichai Sitsongpeenong entered this fight with a record of 112-29-5 (30 knockouts) and he is ranked as the No.2 super welterweight (154 lbs, 69.9 kg) in the world. He has already fought nine times in 2016 winning the Kunlun World Max tournament in January against Enriko Gogokhia (=Sitthichai vs Gogokhia 2), the Glory Lw title with Robin van Roosmalen in June (=Roosmalen vs Sitthichai 2) but then he lost the rematch with #1 Superbon Banchamek in his last bout (=Sitthichai vs Superbon 2).
His opponent, the 2015 K-1 World champion Marat Grigorian, has a record of 48-9-1 (28 knockouts) and he entered as the No.4 in the same weight class. In their previous fights Sitthichai beated Grigorian both in 2015 (=Sitthichai vs Grigorian) and in 2016 (=Sitthichai vs Grigorian 2). After this fight Marat has won three bouts defeating Mohamed El-Mir in his last one. Sitthichai vs Grigorian 3 is valid for the Glory lightweight title (Sittichai’s first defense); undercard of Rico Verhoeven vs Badr Hari – Glory 36 Collision. Watch the video and rate this fight!