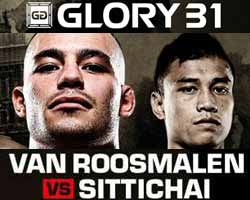 The Glory Lw champion Robin van Roosmalen entered this fight with a professional kickboxing record of 47-14-3 (14 knockouts) and he is ranked as the No.1 super welterweight in the world. He suffered his last defeat in 2013 when he faced Andy Ristie (final of the Glory Lw tournament, Roosmalen vs Ristie); since then he has won five bouts winning the Glory Lw belt in 2014, against Davit Kiria (=Kiria vs Roosmalen 3), taking revenge on Ristie (=Roosmalen vs Ristie 2) and beating Sitthichai in his last fight (but it was a controversial decision, Roosmalen vs Sitthichai I).
His opponent, the former Lumpinee Ww champion Sitthichai Sitsongpeenong, has an official record of 110-29-5 (30 knockouts) and he entered as the No.2 in the same weight class. After losing to Roosmalen last year he has collected six consecutive victories winning the Kunlun World Max tournament in 2015 and beating Marat Grigorian in the final of the Glory lightweight contender tournament in 2016 (=Sitthichai vs Grigorian 2). Roosmalen vs Sitthichai 2, main event of the Glory 31, is valid for the Glory lightweight title (Roosmalen’s third defense). Watch the video and rate this fight!