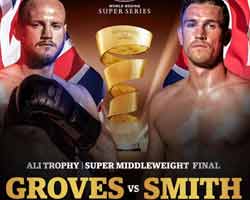 Review by AllTheBestFights.com: 2018-09-28, pretty good fight between George Groves and Callum Smith: it gets three stars.

The Wba super-Mw champion George Groves entered this fight with a pro boxing record of 28-3-0 (20 knockouts) and he is ranked as the No.1 super middleweight in the world. He lost to Badou Jack in 2015 (via split decision, Groves vs Jack), but then he has won seven bouts beating Fedor Chudinov (Groves vs Chudinov), Jamie Cox (George Groves vs Jamie Cox) and Chris Eubank Jr in his last three (Chris Eubank Jr vs George Groves).
His opponent, the undefeated Wbc Diamond champ Callum Smith, has a perfect record of 24-0-0 (17 knockouts) and he entered as the No.4 in the same weight class. In his last three bouts he has won over Luke Blackledge (Smith vs Blackledge), Erik Skoglund (Callum Smith vs Erik Skoglund) and Nieky Holzken (Callum Smith vs Nieky Holzken). Groves vs Smith is the final of the World Boxing Super Series super-Mw tournament and it is valid for the WBA and WBC Diamond super middleweight titles. Watch the video and rate this fight!

(Alternative free embeddable video hosted on Dailymotion and not uploaded by AllTheBestFights)
https://www.dailymotion.com/video/x6uerjj