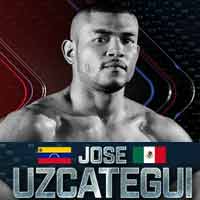 Review by AllTheBestFights.com: 2018-09-28, fight not so exciting between Jose Uzcategui and Ezequiel Maderna: it gets two stars.

The Ibf super-Mw champion Jose Uzcategui entered this fight with a pro record of 27-2-0 (23 KOs=85%) and he is ranked as the No.6 super middleweight in the world (currently the #1 in this division is George Groves). Between 2017 and 2018 he has faced twice Andre Dirrell losing the first bout (via disqualification since Jose hit the American after the bell but ‘Bolivita’ was ahead on points, Andre Dirrell vs Jose Uzcategui I) but then he has won the rematch (Andre Dirrell vs Jose Uzcategui II).
His opponent, the former Olympian Ezequiel Osvaldo Maderna, has an official boxing record of 26-4-0 (16 knockouts) and he entered as the No.43 in the same weight class. He was defeated by Martin Fidel Rios in 2017 (via split decision) but then he has beat Jorge Daniel Caraballo and he has taken revenge on Rios. Uzcategui vs Maderna is on the undercard of Jerwin Ancajas vs Alejandro Santiago Barrios. Watch the video and rate this fight!