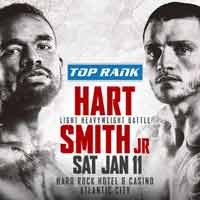 Jesse Hart entered this fight with a pro boxing record of 26-2-0 (21 KOs=81%) and he is ranked as the No.8 light heavyweight in the world (currently the #1 in this division is Dmitry Bivol). He lost to Gilberto Ramirez in 2018 (Gilberto Ramirez Sanchez vs Jesse Hart 2) but he came back to win against Sullivan Barrera in 2019 (Jesse Hart vs Sullivan Barrera).
His opponent, Joe Smith Jr, has a record of 24-3-0 (20 KOs=83%) and he entered as the No.14 in the same weight class but he lost two out of his last three fights, against Sullivan Barrera in 2017 (Joe Smith Jr vs Sullivan Barrera) and Dmitry Bivol in 2019 (Dmitry Bivol vs Joe Smith Jr); between these two bouts he beat Melvin Russell (Joe Smith Jr vs Melvin Russell). Hart vs Smith is the main event of the evening. Watch the video and rate this fight!