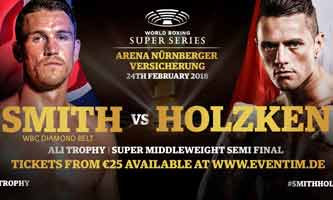 Review by AllTheBestFights.com: 2018-02-24, pretty good fight between Callum Smith and Nieky Holzken: it gets three stars.

Both undefeated, the WBC Diamond super-Mw champion Callum Smith entered this fight with a perfect record of 23-0-0 (17 knockouts) and he is ranked as the No.4 super middleweight in the world (currently the #1 in this division is George Groves) while his opponent, the former Glory Ww kickboxing champion Nieky Holzken (who replaces Juergen Braehmer, pulled out a few days before the bout with an illness), has a boxing record of 13-0-0 (10 KOs=77% – his kickboxing record is 90-14-0) and he entered as the No.24 in the same weight class. In their last two bouts Smith has defeated Luke Blackledge (Smith vs Blackledge) and Erik Skoglund (Callum Smith vs Erik Skoglund) while Holzken has beat Cagri Ermis and Viktor Polyakov. Smith vs Holzken is the semifinal of the World Boxing Super Series super-Mw tournament. Watch the video and rate this fight!