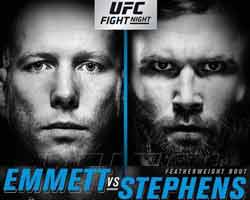 Review by AllTheBestFights.com: 2018-02-24, pretty good fight between Josh Emmett and Jeremy Stephens: it gets three stars (UFC Performance of the Night).

Josh Emmett entered this fight with a pro mma record of 13-1-0 (46% finishing rate) and he is ranked as the No.5 featherweight in the world (currently the #1 in this division is Max Holloway). He fought three times in 2017 losing to Desmond Green but then he beat Felipe Arantes and Ricardo Lamas (Ricardo Lamas vs Josh Emmett).
His opponent, Jeremy Stephens, has a record of 27-14-0 (74% finishing rate) and he entered as the No.8 in the same weight class. He lost two consecutive fights between 2016 and 2017, against Frankie Edgar (Edgar vs Stephens) and Renato ‘Moicano’ Carneiro (Stephens vs Moicano) but then he has beat Gilbert Melendez (Stephens vs Melendez) and Doo Ho Choi (Jeremy Stephens vs Doo Ho Choi). Stephens vs Emmett is the main event of UFC on Fox 28. Watch the video and rate this fight!

(Free embeddable video hosted on Youtube and not uploaded by AllTheBestFights)
https://www.youtube.com/watch?v=ZWUc-1FZQKw