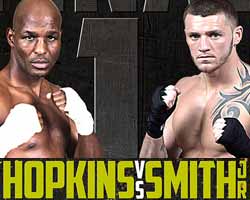 The former world champion in two different weight classes Bernard Hopkins (he is 51 years old, 24 years older than Smith) entered this fight with a pro boxing record of 55-7-2 (32 knockouts) but he is not ranked as he hasn’t fought since November 8, 2014 when he was defeated by Sergey Kovalev (=Hopkins vs Kovalev). Before this bout, when he was 49 years old, he had won his last world title against Beibut Shumenov (=Hopkins vs Shumenov).
His opponent, Joe Smith Jr, has a record of 22-1-0 (18 KOs=82%) and he entered as the No.7 light heavyweight in the world (currently the #1 in this division is Andre Ward). He suffered his only loss when he faced Eddie Caminero in 2010, since then he has collected 16 consecutive victories beating Fabiano Pena and Andrzej Fonfara in 2016 (=Fonfara vs Smith). Hopkins vs Smith is valid for the WBC International light heavyweight title. Watch the video and rate this fight!