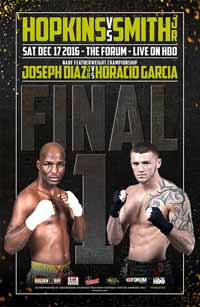 Review by AllTheBestFights.com: 2016-12-17, some good exchanges in the second part of the fight but it is not enough to get three stars: Oleksandr Usyk vs Thabiso Mchunu gets two.

The undefeated 2012 Olympic heavyweight gold medalist and current Wbo champion Oleksandr Usyk entered this fight with a perfect boxing record of 10-0-0 (9 KOs=90%) and he is ranked as the No.1 cruiserweight in the world. He has won over Pedro Rodriguez (=Usyk vs Rodriguez) and Krzysztof Glowacki in his last two bouts (=Glowacki vs Usyk).
His opponent, Thabiso Mchunu, has an official record of 17-2-0 (11 knockouts) and he entered as the No.39 in the same weight class. He lost to Ilunga Makabu in 2015 but he came back to win against Boniface Kabore in 2016. Usyk vs Mchunu is valid for the WBO World cruiserweight title (Usyk’s first defense); undercard of Bernard Hopkins vs Joe Smith Jr. Watch the video and rate this fight!