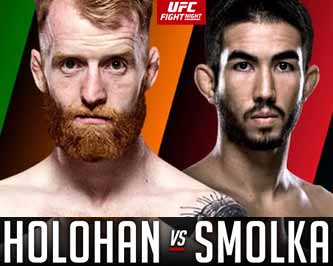 Review by AllTheBestFights.com: 2015-10-24, nice back and forth fight between Patrick Holohan and Louis Smolka: it gets three stars.

Patrick Holohan entered this fight with a professional mma record of 12-1-1 (75% finishing rate) and he is ranked as the No.13 flyweight in the world while his opponent, Louis Smolka, has an official record of 9-1-0 (78% finishing rate) and he entered as the No.10 in the same weight class (currently the #1 in this division is Demetrious Johnson). Both fighters suffered their only loss in 2014: Holohan was defeated by Chris Kelades but then he came back to win beating Shane Howell and Vaughan Lee, while Smolka lost to Chris Cariaso (=Cariaso vs Smolka) and then he has won over Richie Vaculik and Neil Seery. Holohan vs Smolka is the main event of the UFC Fight Night 76 (replacing the fight Dustin Poirier vs Joseph Duffy because Duffy was forced to pull out of the bout three days prior to the event). Watch the video and rate this fight!