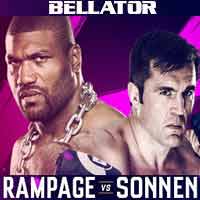 Review by AllTheBestFights.com: 2018-01-20, disappointing fight between Quinton Jackson and Chael Sonnen: it gets two stars.

The former Ufc and Bellator light-Hw tournament (season 10) champion Quinton Rampage Jackson entered this fight with a professional mma record of 37-12-0 (62% finishing rate) and he is ranked as the No.22 heavyweight in the world but he comes off the loss against Muhammed King Mo Lawal in their rematch (=Rampage vs Lawal II) while in their first fight, in 2014, Jackson had beat Lawal (=Rampage vs Lawal I). After this bout he had won over Fabio Maldonado in 2015 (=Jackson vs Maldonado) and Satoshi Ishii in 2016 (=Jackson vs Ishii).
His opponent, Chael Sonnen, has an official record of 29-15-1 (41% finishing rate) and he entered as the No.22 light heavyweight. He fought twice last year losing to Tito Ortiz (=Ortiz vs Sonnen) and defeating Wanderlei Silva (=Sonnen vs Silva). Sonnen vs Rampage Jackson is the quarterfinal of the Bellator heavyweight World Grand Prix tournament (in which also Fedor Emelianenko will fight); undercard of Douglas Lima vs Rory MacDonald – Bellator 192. Watch the video and rate this fight!

(Free embeddable video hosted on Ok.ru not uploaded by AllTheBestFights)