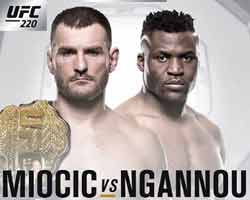 Review by AllTheBestFights.com: 2018-01-20, good start but the rest of the fight was not so exciting: Stipe Miocic vs Francis Ngannou gets two stars.

The Ufc Hw champion Stipe Miocic entered this fight with a professional mma record of 17-2-0 (82% finishing rate) and he is ranked as the No.1 heavyweight in the world. He suffered his last loss when he faced Junior dos Santos in their first bout in 2014 (via unanimous decision, dos Santos vs Miocic), after this fight he has collected five victories winning the Ufc belt against Fabricio Werdum (=Werdum vs Miocic) and defending it with Alistair Overeem (=Miocic vs Overeem) and Junior dos Santos in their second bout (=Miocic vs dos Santos 2).
His opponent, Francis Ngannou, has an official record of 11-1-0 (100% finishing rate) and he entered as the No.2 in the same weight class. He suffered his only loss when he faced Zoumana Cisse at his second pro mma fight in 2013, since then he has won ten consecutive fights beating Anthony Hamilton, Andrei Arlovski (=Arlovski vs Ngannou) and Alistair Overeem in his last three (=Overeem vs Ngannou). Miocic vs Ngannou, main event of Ufc 220, is valid for the Ufc heavyweight title (Miocic’s third defense); they also faced each other a second time on March 27, 2021 (Stipe Miocic vs Francis Ngannou 2). Watch the video and rate this fight!

(Free embeddable video hosted on Youtube and not uploaded by AllTheBestFights)
https://www.youtube.com/watch?v=6utchsZ5NDM