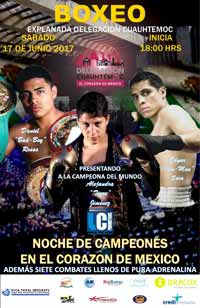 The former Wbc light-Flw champion Edgar Sosa entered this fight with a professional boxing record of 52-10-0 (30 knockouts) and he is ranked as the No.6 flyweight in the world but he lost two out of his last three bouts, against Roman Gonzalez (=Gonzalez vs Sosa) and Donnie Nietes (=Nietes vs Sosa). Between these two fights he beat Orlando Garcia Guerrero.
His opponent, Julio Cesar Martinez Aguilar, has an official record of 5-1-0 (3 knockouts) and he entered as the No.69 super flyweight. He suffered his only loss at his pro boxing debut against Joaquin Cruz in 2015, but since then he has won five bouts taking revenge on Cruz in 2016. Julio Cesar Martinez vs Edgar Sosa is the main event of the evening. Watch the video and rate this fight!