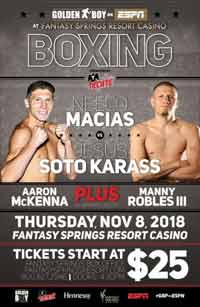 Review by AllTheBestFights.com: 2018-11-08, amazing pace between Neeco Macias and Jesus Soto Karass: it is close to get four stars!

The undefeated Neeco Macias entered this fight with a perfect boxing record of 17-0-0 (10 knockouts) and he is ranked as the No.86 super welterweight in the world. In his last three bouts he has won over Cesar Soriano Berumen, Travis Hartman and Marvin Cabrera.
His opponent, Jesus Soto Karass, has an official record of 28-13-4 (18 knockouts) but he is not ranked as he hasn’t fought since November 2, 2017 when he was defeated by Juan Carlos Abreu; before this bout, in 2017, he had also lost to Mauricio Herrera (Mauricio Herrera vs Jesus Soto Karass). Macias vs Soto Karass is the main event of the evening. Watch the video and rate this fight!