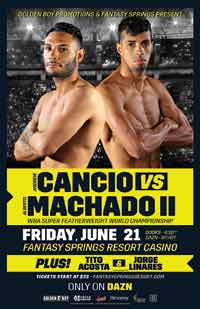 Review by AllTheBestFights.com: 2019-06-21, great performance by both boxers: Angel Acosta vs Elwin Soto gets three stars.

The Wbo light-Flw champion Angel Acosta entered this fight with a pro boxing record of 20-1-0 (20 KOs=100%) and he is ranked as the No.3 light flyweight in the world (currently the #1 in this division is Ken Shiro). ‘Tito’ Acosta suffered his only loss when he faced Kosei Tanaka in 2017 (Tanaka vs Acosta); after this bout he has won four bouts beating Abraham Rodriguez (Angel Acosta vs Abraham Rodriguez) and Ganigan Lopez in his last two (Angel Acosta vs Ganigan Lopez).
His opponent, Elwin Soto, has a record of 14-1-0 (10 knockouts) and he entered as the No.51 in the same weight class. He was defeated by Danny Andujo in 2017 but since then he has won twelve consecutive fights winning over Edgar Ornelas and Joel Castro Cano in 2019. Acosta vs Soto is valid for the WBO World light flyweight title (Acosta’s fourth defense); undercard of Andrew Cancio vs Alberto Machado 2. Watch the video and rate this fight!