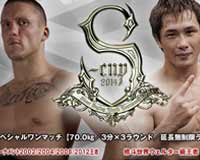 Review: 2014-11-30, pretty good fight between Andy Souwer and Kuniyoshi Hironaka: it gets three stars. The former K-1 World MAX champion Andy Souwer entered this fight with a pro kickboxing record of 154-16-1 (90 knockouts) and he is ranked as the No.9 super welterweight in the world, he suffered his last defeat in July when he faced Mustapha Haida, after this bout he beat Max Baumert and Ardalan Sheikholeslami.
His opponent, Kuniyoshi Hironaka, has a record of 2-1-0 but he has a mma record of 23-9-0 and he fought also in the Ultimate Fighting Championship between 2006 and 2008 but he won just one out of his four Ufc fights. Souwer vs Hironaka is the main event of Shoot Boxing S-cup 2014. Watch the video and rate this fight!