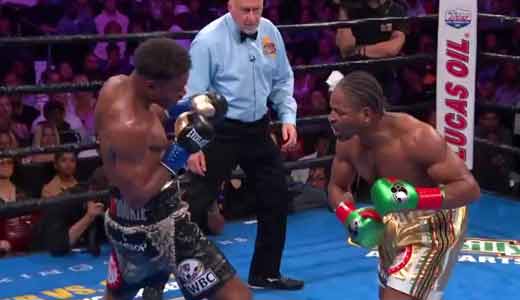 Review by AllTheBestFights.com: 2019-09-28, close, tough and exciting fight thanks to a great performance by both boxers: Errol Spence Jr vs Shawn Porter is one of the best boxing fights of the year 2019 and it gets four stars!

The undefeated former Olympian and current Ibf Ww champion Errol Spence Jr entered this fight with a perfect record of 25-0-0 (21 KOs=84%) and he is ranked as the No.2 welterweight in the world (currently the #1 in this division is Terence Crawford). In his last three fights he has won over Lamont Peterson (Errol Spence Jr vs Lamont Peterson), Carlos Ocampo (Errol Spence Jr vs Carlos Ocampo) and Mikey Garcia (Errol Spence Jr vs Mikey Garcia).
His opponent, the former Ibf and current Wbc Ww champ Shawn Porter, has a boxing record of 30-2-1 (17 knockouts) and he entered as the No.4 in the same weight class. He lost to Keith Thurman in 2016 (4-stars fight, Thurman vs Porter), but then he has won four bouts beating Danny Garcia (Danny Garcia vs Shawn Porter) and Yordenis Ugas in his last two (Shawn Porter vs Yordenis Ugas). Spence vs Porter is valid for the WBC and IBF World welterweight titles. Watch the video and rate this fight!