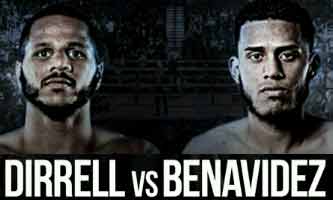 Review by AllTheBestFights.com: 2019-09-28, Anthony Dirrell vs David Benavidez gets three stars thanks to a good second part of the fight.

The Wbc super-Mw champion Anthony Dirrell entered this fight with a pro record of 33-1-1 (24 knockouts) and he is ranked as the No.13 supr middleweight in the world. He suffered his only loss when he faced Badou Jack in 2015 (Dirrell vs Jack), after this fight he has won six bouts beating Abraham Han (Anthony Dirrell vs Abraham Han) and Avni Yildirim in his last two (Anthony Dirrell vs Avni Yildirim).
His opponent, the undefeated former Wbc super-Mw champ David Benavidez, has a perfect boxing record of 21-0-0 (18 KOs=86%) and he entered as the No.18 in the same weight class. In his last three fights he has beat twice Ronald Gavril (David Benavidez vs Ronald Gavril I and David Benavidez vs Ronald Gavril II) and once J’Leon Love (David Benavidez vs J’Leon Love). Dirrell vs Benavidez is valid for the WBC World super middleweight title (Dirrell’s first defense); undercard of Errol Spence Jr vs Shawn Porter. Watch the video and rate this fight!