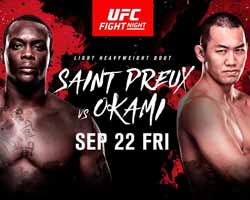 Review by AllTheBestFights.com: 2017-09-23, Ovince St Preux vs Yushin Okami gets three stars only thanks to a good finish (UFC Performance of the Night).

Ovince St Preux entered this fight with a professional mma record of 20-10-0 (75% finishing rate) and he is ranked as the No.15 light heavyweight in the world but he won just two out of his last six bouts, the last one against Marcos Rogerio de Lima (=St Preux vs Rogerio de Lima). Before this fight he had lost to Jon Jones (=Jones vs St Preux), Jimi Manuwa (=St Preux vs Manuwa) and Volkan Oezdemir (=St Preux vs Oezdemir).
His opponent, the black belt in judo Yushin Okami, has an official record of 34-10-0 (50% finishing rate) and he entered as the No.42 welterweight. He suffered two consecutive losses between 2014 and 2015, against David Branch and Jon Fitch (=Fitch vs Okami), but then he has won four bouts beating Andre Lobato in 2017. Ovince St Preux vs Yushin Okami is the main event of UFC Fight Night 117. Watch the video and rate this fight!