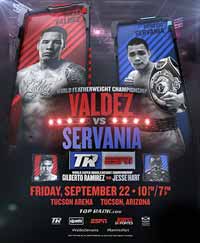 Review by AllTheBestFights.com: 2017-09-22, great fight between Oscar Valdez and Genesis Servania: it gets three stars.

Both undefeated, the Wbo Fw champion Oscar Valdez entered this fight with a perfect record of 22-0-0 (19 KOs=86%) and he is ranked as the No.6 featherweight in the world (currently the #1 in this division is Leo Santa Cruz) while his opponent, Genesis Servania, has a record of 29-0-0 (12 knockouts) and he entered as the No.39 in the same weight class. Between 2016 and 2017 Valdez fought four times beating Hiroshige Osawa (=Valdez vs Osawa) and Miguel Marriaga in his last two (4-stars fight, Valdez vs Marriaga) while Servania fought twice defeating Alexander Espinoza and Ralph Jhon Lulu. Oscar Valdez vs Genesis Servania is valid for the WBO World featherweight title (Valdez’s third defense). Watch the video and rate this fight!