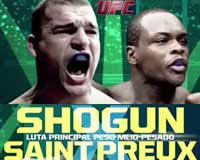 Review: 2014-11-08, the fight between Mauricio Rua and Ovince St Preux gets three stars thanks to a good finish (UFC Performance of the Night). The black belt in Bjj Mauricio ‘Shogun’ Rua entered this fight with a professional mma record of 22-9-0 (91% finishing rate) and he is ranked as the No.12 light heavyweight in the world, he won just one out of his last four bouts, against James Te Huna in 2013 (=Rua vs Te Huna); after this fight he faced Dan Henderson for the second time, in his only bout of 2014 but he lost via tko (=Rua vs Henderson 2).
His opponent, Ovince St Preux (who replaces Jimi Manuwa because he had pulled out of the fight due to injury), has an official record of 16-6-0 (75% finishing rate) and he entered as the No.20 in the same weight class, he has already fought three times in 2014 beating Nikita Krylov (=St Preux vs Krylov) and Ryan Jimmo (=Jimmo vs St Preux) but then he lost to Ryan Bader (=Bader vs St Preux). Shogun Rua vs St Preux ‘Osp’ is the main event of UFC Fight Night 56; they also faced each other a second time on May 7, 2022 (Mauricio Shogun Rua vs Ovince St Preux 2). Watch the video and rate this fight!