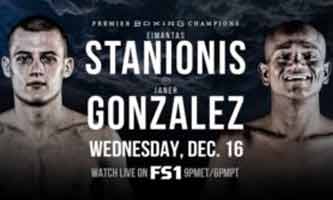 Review by AllTheBestFights.com: 2020-12-16, good fight between Eimantas Stanionis and Janer Gonzalez: it gets three stars (take a look at our ranking of the best boxing fights of 2020).
The former Olympian Eimantas Stanionis entered this fight with a perfect boxing record of 11-0-0 (8 knockouts) and he is ranked as the No.33 welterweight in the world. In his last three fights he has won over Evincii Dixon, Julio Cesar Sanchez and Justin DeLoach (Eimantas Stanionis vs Justin DeLoach).
His opponent, Janer Gonzalez, has an official record of 19-3-1 (15 KOs=79%) and he entered as the No.440 in the same weight class but his last victory was with Miguel Alejandro Jimenez in 2017. After this bout he has lost three consecutive fights: against Radzhab Butaev, Jamal James (Jamal James vs Janer Gonzalez) and Ivan Golub. Gonzalez vs Stanionis is the main event of the evening. Watch the video and rate this fight!