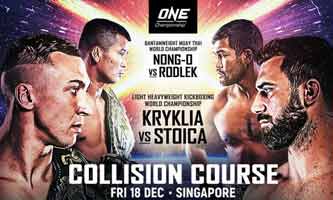 Review by AllTheBestFights.com: 2020-12-18, great finish but the rest of the fight was not so exciting: Roman Kryklia vs Andrei Stoica gets two stars (take a look at our ranking of the best kickboxing fights of 2020).
The ONE Kickboxing and Kunlun Fight Hw tournament champion Roman Kryklia entered this fight with a professional kickboxing record of 45-7-0 (24 knockouts) and he is ranked as the No.4 heavyweight in the world. He lost to Iraj Azizpour in 2018 but then he has won nine consecutive bouts taking revenge of Azizpour in February 2019 and beating Tarik Khbabez in November of the same year.
His opponent, the former SuperKombat super-cruiserweight champ Andrei Stoica, has an official record of 52-12-0 (29 knockouts). He lost to Tarik Khbabez last year but then he has won over Ibrahim El Bouni, Anderson Silva and Pavel Voronin. Stoica vs Kryklia, main event of “ONE Championship: Collision Course”, is valid for the ONE Kickboxing light-heavyweight title (Kryklia’s first defense). Watch the video and rate this fight!