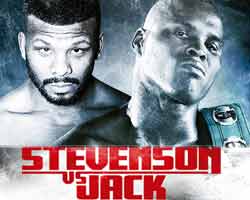 Review by AllTheBestFights.com: 2018-05-19, back and forth fight between Adonis Stevenson and Badou Jack: it gets three stars.

The 40 years-old Wbc light-Hw champion Adonis Stevenson (six years older than Jack) entered this fight with a boxing record of 29-1-0 (24 KOs=83%) and he is ranked as the No.1 light heavyweight in the world. He suffered his only defeat when he faced Darnell Boone in 2010, since then ‘Superman’ Stevenson has won 16 consecutive bouts taking revenge on Boone in 2013 (Stevenson vs Boone 2) and beating Thomas Williams Jr in 2016 (Stevenson vs Williams Jr) and Andrzej Fonfara in 2017 (Adonis Stevenson vs Andrzej Fonfara 2).
His opponent, the former Olympian, Wbc super-Mw and Wba light-Hw champion Badou Jack, has an official record of 22-1-2 (13 knockouts) and he entered as the No.3 in the same weight class. He suffered his only loss when he faced Derek Edwards in 2014, after this bout he has collected six victories and one draw; in 2017 he drew with James DeGale (4-stars fight, DeGale vs Jack) and beat Nathan Cleverly (Nathan Cleverly vs Badou Jack). Stevenson vs Jack is valid for the WBC World light heavyweight title (Stevenson’s nineth defense). Watch the video and rate this fight!

(Free embeddable video hosted on Youtube and not uploaded by AllTheBestFights)
https://www.youtube.com/watch?v=RnWI4vXtCqo