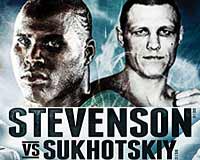 Review: 2014-12-19, Adonis Stevenson vs Dmitry Sukhotsky gets three stars only thanks to a good finish. Adonis Stevenson entered this fight with a professional boxing record of 24-1-0 (20 KOs=83%) and he is ranked as the No.1 light heavyweight in the world, he suffered his only defeat in 2010 when he faced Darnell Boone, since then he has won 11 consecutive fights taking revenge on Boone (on March 22, 2013, Stevenson vs Boone 2) and winning the WBC light-Hw title beating Chad Dawson in 2013 (The Ring magazine Knockout of the Year: Dawson vs Stevenson). After this bout he has defende his belt three times, the last one against Andrzej Fonfara (=Stevenson vs Fonfara)
His opponent, Dmitry Sukhotsky, has an official record of 22-2-0 (16 knockouts) and he entered as the No.13 in the same weight class, the last time he lost was in 2012, against Cornelius White, since then he has won four fights, the last one against Joey Vegas. ‘Superman’ Stevenson vs Sukhotsky is valid for the WBC World light heavyweight title (Stevenson’s fourth defense). Watch the video and rate this fight!