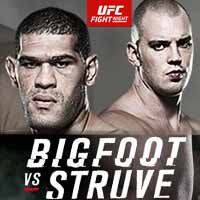 Review by AllTheBestFights.com: 2016-05-08, fight not particularly exciting between Antonio Silva and Stefan Struve: it gets two stars (UFC Performance of the Night).

The black belt in karate, judo and Bjj Antonio ‘Bigfoot’ Silva entered this fight with a pro mma record of 19-8-1 (89% finishing rate) and he is ranked as the No.11 heavyweight in the world but he won just one out of his last four bouts, against Soa Palelei (=Silva vs Palelei); after this fight he lost the rematch with Mark Hunt (=Hunt vs Silva 2).
His opponent, Stefan Struve, has a record of 26-8-0 (89% finishing rate) and he entered as the No.32 in the same weight class. He also lost three out of his last four bouts but last year he beat Antonio Rodrigo Nogueira (=Nogueira vs Struve), then he was defeated by Jared Rosholt (=Struve vs Rosholt). ‘Pezao’ Silva vs Struve is on the undercard of Alistair Overeem vs Andrei Arlovski – UFC Fight Night 87. Watch the video and rate this fight!