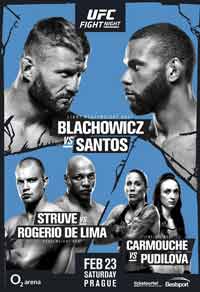 Review by AllTheBestFights.com: 2019-02-23, pretty good finish between Stefan Struve and Marcos Rogerio de Lima but it is not enough to get three stars: it gets two (UFC Performance of the Night).

Stefan Struve entered this fight with a pro mma record of 28-11-0 (89% finishing rate) and he is ranked as the No.27 heavyweight in the world but he comes off three consecutive losses, against Alexander Volkov (Alexander Volkov vs Stefan Struve), Andrei Arlovski (Andrei Arlovski vs Stefan Struve) and Marcin Tybura; his last victory was with Daniel Omielanczuk in 2016 (Stefan Struve vs Daniel Omielanczuk).
His opponent, Marcos Rogerio de Lima, has a record of 16-5-1 (87% finishing rate) and he entered as the No.50 in the same weight class. Marcos ‘Pezao’ was defeated by Ovince St Preux in 2017 (Ovince St Preux vs Marcos Rogerio de Lima) but he came back to win in 2018 against Adam Wieczorek. Struve vs Rogerio de Lima is on the undercard of Jan Blachowicz vs Thiago Santos – UFC Fight Night 145 (UFC on ESPN+ 3). Watch the video and rate this fight!