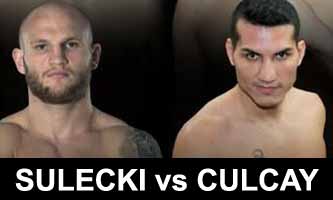 Review by AllTheBestFights.com: 2017-10-21, good performance by both boxers: Maciej Sulecki vs Jack Culcay gets three stars.

The undefeated Maciej Sulecki entered this fight with a perfect record of 25-0-0 (10 knockouts) and he is ranked as the No.7 super welterweight in the world (currently the #1 in this division is Erislandy Lara). In his last three bouts he has won over Hugo Centeno Jr (=Sulecki vs Centeno Jr), Michi Munoz and Damian Ezequiel Bonelli.
His opponent, the former Wba light-Mw champion Jack Culcay, has an official boxing record of 22-2-0 (11 knockouts) and he entered as the No.10 in the same weight class but he comes off the loss against Demetrius Andrade (via split decision, Andrade vs Culcay); before this bout he had beat Jean Carlos Prada (=Culcay vs Prada). Sulecki vs Culcay is on the undercard of Murat Gassiev vs Krzysztof Wlodarczyk. Watch the video and rate this fight!