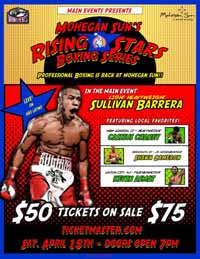 Review by AllTheBestFights.com: 2017-04-15, fight not particularly good between Sullivan Barrera and Paul Parker: it gets two stars.

Sullivan Barrera entered this fight with a professional record of 18-1-0 (13 knockouts) and he is ranked as the No.12 light heavyweight in the world. He suffered his only loss when he faced Andre Ward in 2016 (=Ward vs Barrera); after this bout he has beat Vyacheslav Shabranskyy (=Shabranskyy vs Barrera).
His opponent, Paul Parker, has a record of 8-1-0 (4 knockouts) but he is not ranked as he hasn’t fought since February 16, 2016 when he defeated Lionell Thompson. Before this bout he had lost to Vyacheslav Shabranskyy (=Shabranskyy vs Parker). Sullivan Barrera vs Paul Parker is the main event of the evening. Watch the video and rate this fight!