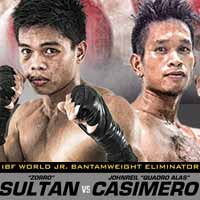 Review by AllTheBestFights.com: 2017-09-16, some good exchanges between John Riel Casimero and Jonas Sultan but it is not enough to get three stars: it gets two.

The former world champion in two different weight classes John Riel Casimero entered this fight with a pro record of 24-3-0 (15 knockouts) and he is ranked as the No.7 super flyweight in the world (currently the #1 in this division is Srisaket Sor Rungvisai). He lost to Amnat Ruenroeng in 2015 (=Ruenroeng vs Casimero I) but then he took revenge on him in 2016 (=Ruenroeng vs Casimero II) and he has beat Charlie Edwards (=Casimero vs Edwards) and Jecker Buhawe.
His opponent, Jonas Sultan, has an official boxing record of 13-3-0 (9 knockouts) and he entered as the No.15 in the same weight class. He suffered his last loss when he faced Go Onaga in 2015, since then he has won four bouts defeating Sonny Boy Jaro in 2017. Jonas Sultan vs John Riel Casimero is on the undercard of Milan Melindo vs Hekkie Budler – Pinoy Pride 42. Watch the video and rate this fight!