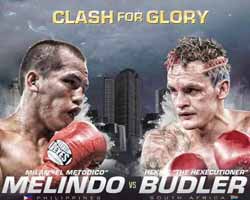 Review by AllTheBestFights.com: 2017-09-16, disappointing fight between Milan Melindo and Hekkie Budler: it gets two stars.

The Ibf light-Flw champion Milan Melindo entered this fight with a professional record of 36-2-0 (13 knockouts) and he is ranked as the No.3 light flyweight in the world (currently the #1 in this division is Kosei Tanaka). He lost to Javier Mendoza in 2015 (=Melindo vs Mendoza), but then he has won four consecutive bouts defeating Fahlan Sakkreerin Jr (=Melindo vs Sakkreerin Jr) and Akira Yaegashi in his last two (=Yaegashi vs Melindo).
His opponent, the former world champion in two different weight classes Hekkie Budler, has a boxing record of 31-2-0 (10 knockouts) and he entered as the No.6 in the same weight class. He lost to Byron Rojas last year but then he has won over Siyabonga Siyo and Joey Canoy. Milan Melindo vs Hekkie Budler is valid for the IBF World light flyweight title – Pinoy Pride 42. Watch the video and rate this fight!