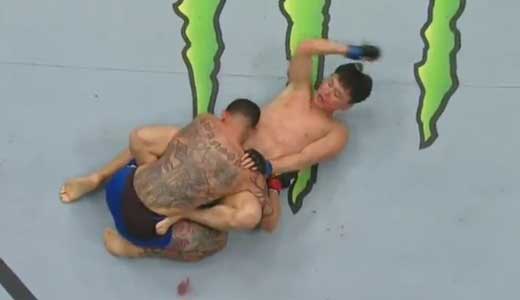 Review by AllTheBestFights.com: 2016-12-10, great action packed fight with some wild exchanges: Cub Swanson vs Doo Ho Choi is one of the best mma fights of 2016 and it gets four stars (UFC Fight of the Night).

The black belt in Brazilian jiu-jitsu and judo Cub Swanson entered this fight with a professional record of 23-7-0 (65% finishing rate) and he is ranked as the No.9 featherweight in the world (currently the #1 in this division is Jose Aldo). He lost two consecutive fights between 2014 and 2015, against Frankie Edgar (=Edgar vs Swanson) and Max Holloway (=Swanson vs Holloway), but then he came back to win in 2016 against Hacran Dias (=Swanson vs Dias) and Tatsuya Kawajiri.
His opponent, Doo Ho Choi, has a mma record of 14-1-0 (86% finishing rate) and he entered as the No.15 in the same weight class. He suffered his only loss when he faced Yusuke Kagiyama in 2010, since then he has collected 12 consecutive victories beating Thiago Tavares in 2016 (=Tavares vs Choi). Swanson vs Choi is on the undercard of Max Holloway vs Anthony Pettis – UFC 206. Watch the video and rate this fight!