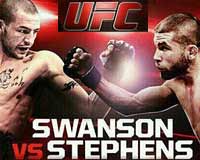 Review: 2014-06-28, good fight between Cub Swanson and Jeremy Stephens: it gets three stars (UFC Fight of the Night). The black belt in Bjj Cub Swanson entered this fight with a professional mma record of 20-5-0 (75% finishing rate) and he is ranked as the No.4 featherweight in the world (currently the #1 in this division is Jose Aldo), he suffered his last defeat in 2011 when he faced Ricardo Lamas (=Lamas vs Swanson), since then he has fought five times and in 2013 he beat Dustin Poirier (=Swanson vs Poirier) and Dennis Siver (=Swanson vs Siver).
His opponent, Jeremy Stephens (black belt in Brazilian jiu jitsu as well), has an official record of 23-9-0 (78% finishing rate) and he entered as the No.11 in the same weight class, he lost three consecutive fights between 2011 and 2012 but he came back to victory in 2013 defeating Estevan Payan and Rony Jason (=Stephens vs Jason); Stephens has already fought and won in 2014 beating Darren Elkins (=Elkins vs Stephens). Swanson vs Stephens is the main event of UFC Fight Night 44 San Antonio. Watch the video and rate this fight!