Review: 2014-04-12, technical fight but not spectacular: Raymundo Beltran vs Arash Usmanee gets two stars. Raymundo Beltran entered this fight with a pro boxing record of 28-6-1 (17 knockouts) and he is ranked as the No.4 lightweight in the world, he fought twice in 2013 winning the first bout against Alejandro Rodriguez and then drawing against Ricky Burns in a fight valid for the WBO Lw title (controversial split decision: Burns vs Beltran).
His opponent, Arash Usmanee, has an official record of 20-1-1 (10 knockouts) and he entered as the No.9 super featherweight, he also fought twice in 2013 losing the first bout against Rances Barthelemy (=Barthelemy vs Usmanee) and then he drew against Argenis Mendez in a bout valid for the IBF super-Fw title (=Mendez vs Usmanee). Beltran vs Usmanee is valid for the vacant WBO NABO lightweight title; undercard of Manny Pacquiao vs Timothy Bradley 2. Watch the video and rate this fight! 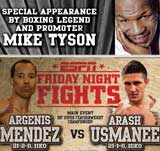 Review: 2013-08-23, nice and close fight between Argenis Mendez and Arash Usmanee: it gets three stars. Compubox punching statistics showed that Mendez landed a total of 314 of 876 punches (36% accuracy rate) compared to 276 of 1119 for Usmanee. Argenis Mendez (21-2-0, 11 KOs) entered as the No.2 super featherweight in the world while Arash Usmanee (20-1-0, 10 KOs) entered as the No.53. Mendez vs Usmanee is valid for the IBF super featherweight title (Mendez’s first defense); first event promoted by the new “Iron Mike Productions”, the new Promotional Company owned by Mike Tyson (and founded by Garry Jonas). Watch the video!

Review: 2013-01-04, good fight and good pace between Rances Barthelemy and Arash Usmanee: three stars; but boxing doesn’t begin 2013 in the best way with this controversial decision… Both undefeated, the Cuban Rances Barthelemy (17-0-0) entered as the No.46 super featherweight in the world while the Afghan-Canadian Arash Usmanee (20-0-0) entered as the No.35. Barthelemy vs Usmanee is the main event of the evening. Watch the video!