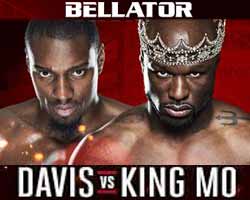 Review by AllTheBestFights.com: 2016-05-14, good finish but the rest of the fight was not so exciting: Phil Davis vs Muhammed Lawal gets two stars.

Phil Davis entered this fight with a professional mma record of 15-3-0 (53% finishing rate) and he is ranked as the No.6 light heavyweight in the world (currently the #1 in this division is Jon Jones). He fought three times last year losing to Ryan Bader (=Davis vs Bader) but then he beat Emanuel Newton (=Davis vs Newton) and Francis Carmont (=Davis vs Carmont).
His opponent, Muhammed ‘King Mo’ Lawal, has an official record of 19-4-0 (68% ko/tko victory rate – he has never won by submission) and he entered as the No.10 in the same weight class. He suffered his last loss when he faced Quinton “Rampage” Jackson in 2014 (=Rampage vs Lawal), since then he has won seven consecutive bouts defeating Jiri Prochazka in his last one (=King Mo vs Prochazka). Davis vs Lawal is the main event of the Bellator 154. Watch the video and rate this fight! 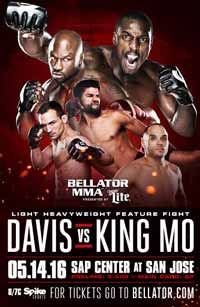 Review by AllTheBestFights.com: 2016-05-14, very nice and tough fight between Saad Awad and Evangelista ‘Cyborg’ Santos: it is close to get four stars!

The black belt in Brazilian jiu-jitsu Evangelista ‘Cyborg’ Santos entered this fight with a pro boxing record of 21-16-0 (86% finishing rate) and he is ranked as the No.66 welterweight in the world. He lost the rematch with Melvin Manhoef in 2014 (=Manhoef vs Cyborg 2) but then he has won over Artenas Young and Brennan Ward (=Ward vs Santos).
His opponent, Saad Awad, has a record of 18-7-0 (78% finishing rate) and he entered as the No.97 lightweight. He fought twice last year beating Rob Sinclair and losing to Patricky Freire (=Freire vs Awad). Cyborg Santos vs Awad is on the undercard of Phil Davis vs Muhammed ‘King Mo’ Lawal – Bellator 154. Watch the video and rate this fight!