Review by AllTheBestFights.com: 2016-04-16, good exchanges between Chad Dawson and Cornelius White: it gets three stars.

The former Wbc, Ibf and Ibo light-Hw champion Chad Dawson entered this fight with a pro boxing record of 33-4-0 (18 knockouts) and he is ranked as the No.18 light heavyweight in the world but he lost three out of his last five bouts. After losing with Tommy Karpency in 2014 (=Dawson vs Karpency) he came back to win in 2015 beating Shujaa El Amin.
His opponent, Cornelius White, has a record of 23-4-0 (17 knockouts) and he entered as the No.57 in the same weight class. He fought three times last year losing to Marcus Browne and winning over William Johnson and Marcus Oliveira. Dawson vs White is on the undercard of Jose Pedraza vs Stephen Smith. Watch the video and rate this fight!

END_OF_DOCUMENT_TOKEN_TO_BE_REPLACED

Review: 2014-01-24, exciting fight thanks to a great start in which both fighters went to the canvas: the fight between Thomas Williams Jr and Cornelius White is the first bout of the year that gets four stars; it could also be a candidate for Round of the Year 2014. The undefeated Thomas Williams Jr entered this fight with a perfect record of 15-0-0 (10 knockouts) and he is ranked as the No.23 light heavyweight in the world while Cornelius White has an official record of 21-2-0 (16 KOs=76%) and he entered as the No.22 in the same weight class, his only defeats, both by tko, came to Don George in 2011 and to Sergey Kovalev in his last fight last year. Williams Jr vs White is valid for the vacant WBO NABO light heavyweight title. Watch the video and rate this fight!

END_OF_DOCUMENT_TOKEN_TO_BE_REPLACED 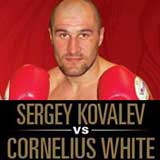