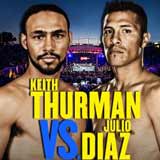 Review: 2014-04-26, pretty good fight between Keith Thurman and Julio Diaz: it gets three stars. The undefeated Keith Thurman entered this fight with a perfect record of 22-0-0 (20 KOs=87%) and he is ranked as the No.9 welterweight in the world, he fought three times in 2013 defeating Jan Zaveck (=Thurman vs Zaveck), Diego Gabriel Chaves (=Thurman vs Chaves) and Jesus Soto Karass (=Thurman vs Karass).
His opponent, Julio Diaz, has an official record of 40-9-1 (29 knockouts) and he entered as the No.41 in the same weight class, he is 34 years old (nine years older than Thurman) and his last world title bout was in 2007 against Juan Diaz (Julio lost by tko); he fought twice in 2013 losing both fights: against Amir Khan (=Khan vs Diaz) and the rematch against Shawn Porter (=Porter vs Diaz 2). Thurman vs Diaz is valid for the interim WBA World welterweight title. Watch the video and rate this fight! 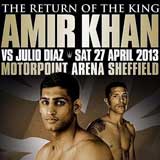