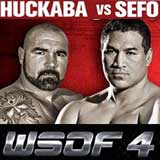 Review: 2013-08-10, Ray Sefo vs Dave Huckaba gets three stars thanks to some good shots and a good finish in the second part of the fight. Dave Huckaba ranked as the No.52 heavyweight in the world, entered the fight with a record of 20-5-0 (95% finishing rate) while Ray Sefo had a record of 2-1-0 (Sefo is also the president of World Series of Fighting!). Sefo vs Huckaba is on the undercard of Tyrone Spong vs Angel DeAnda – WSOF 4. Watch the video!

END_OF_DOCUMENT_TOKEN_TO_BE_REPLACED 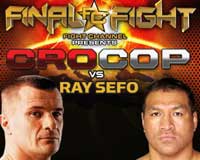 Review: 2012-03-10, pretty third round but it is not enough to get three stars, the years pass for all…even for warriors: Mirko “Cro Cop” Filipovic is 37 years old while Ray Sefo is 41 (fight ended by unanimous decision). Mirko Filipovic entered the fight with a kickboxing record of 16-7-1 while Ray Sefo had a record of 56-21-1. Cro-Cop Filipovic vs Sefo is the main event of “Cro Cop Final Fight”. Watch the video!