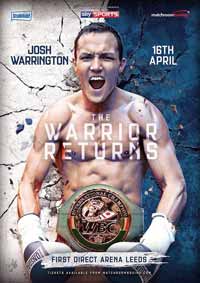 The former Ibf super-Flw champion Rodrigo Guerrero entered this fight with a pro record of 24-5-1 (16 knockouts) and he is ranked as the No.12 super bantamweight in the world. He suffered his last loss when he faced Daiki Kameda in 2013 (=Kameda vs Guerrero), since then he has won five consecutive bouts beating Fernando Aguilar in his last one.
His opponent, the former Ibf Bw champion Stuart Hall, has an official boxing record of 19-4-2 (7 knockouts) and he entered as the No.58 in the same weight class. He lost two consecutive fights in 2014, against Paul Butler (=Hall vs Butler) and Randy Caballero (=Caballero vs Hall), but then he has won three bouts. Guerrero vs Hall is on the undercard of Josh Warrington vs Hisashi Amagasa. Watch the video and rate this fight!