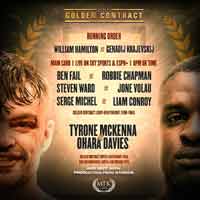 Review by AllTheBestFights.com: 2020-02-21, good fight between Mohamed Mimoune and Tyrone McKenna: it gets three stars.

The former Ibo super-Lw champion Mohamed Mimoune entered this fight with a professional boxing record of 22-3-0 (3 knockouts) and he is ranked as the No.14 super lightweight in the world. He fought twice last year losing to Viktor Postol (Mohamed Mimoune vs Viktor Postol) and beating Darren Surtees.
His opponent, Tyrone McKenna, has an official record of 20-1-1 (6 knockouts) and he entered as the No.56 in the same weight class. He was defeated by Jack Catterall in 2018 (Jack Catterall vs Tyrone McKenna) but then he has won over Lewis Benson, Oscar Amador, Darragh Foley and Mikey Sakyi. Mimoune vs McKenna is valid for the WBC International super lightweight title; undercard of Leigh Wood vs James Dickens. Watch the video and rate this fight! 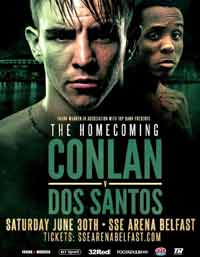 Review by AllTheBestFights.com: 2018-06-30, some good exchanges between Jack Catterall and Tyrone McKenna but it is not enough to get three stars: it gets two.

Both undefeated, the WBO Inter-Continental super-Lw champion Jack Catterall entered this fight with a perfect record of 21-0-0 (12 knockouts) and he is ranked as the No.15 super lightweight in the world while his opponent, Tyrone McKenna, has a boxing record of 16-0-1 (6 knockouts) and he entered as the No.80 the same weight class. In their last three bouts Catterall has beat Tyrone Nurse (Tyrone Nurse vs Jack Catterall), Kevin McCauley and Christopher Sebire while McKenna has defeated Ferenc Katona, Renald Garrido and Anthony Upton. Catterall vs McKenna is valid for the WBO Inter-Continental super lightweight title; undercard of Michael Conlan vs Adeilson Dos Santos. Watch the video and rate this fight!