After having badly battered Fabio Maldonado at UFC 153 in Rio de Janeiro (= Teixeira vs Maldonado), Glover Teixeira called out Quinton ‘Rampage’ Jackson,  but only if the former champion is actually ready and wants to fight: “I don’t care. Like I said, I want to fight who wants to fight, I want to fight Rampage if he comes in, in top shape. I don’t want to fight him if he’s not motivated to fight”.
“I want to fight guys like this guy (Fabio Maldonado) that wants to make a career in the UFC. Quinton’s got too much money already,” said Teixeira.
After hearing that, ‘Rampage’, who was scheduled to face Teixeira at UFC 153, but was forced to pull out of the bout after suffering an undisclosed injury during training, asked Dana White to

After his dominant UFC 153 victory over Stephan Bonnar at HSBC Arena in Rio de Janeiro (= Silva vs Bonnar), Anderson ‘The Spider’ Silva was once again in the middle of the “Jon Jones issue”.
Though the middleweight champion is still against the idea of facing the reigning light heavyweight champion, UFC president Dana White thinks he can change Silva’s mind, not only by words, but using money. A lot of money.
During Saturday night’s post-fight press conference Dana said: “I know he’s been saying ‘no’, but, for the amount of money that would be offered for that fight, I guarantee you I will make Anderson Silva say ‘yes.’”
Silva, however, immediately 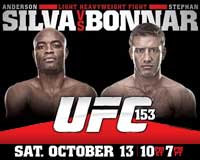 Review: 2012-10-13, good start by Bonnar, good show by ‘The Spyder’ Silva, good finish: Anderson Silva vs Stephan Bonnar gets three stars. Anderson Silva (32-4-0) entered as the No.1 middleweight in the world while Stephan Bonnar (15-7-0) entered as the No.26 light heavyweight. Silva vs Bonnar is the main event of UFC 153; first fight of ‘The Spyder’ Silva in the light heavyweight division. Watch the video!

Review: 2012-10-13, great second round and good finish (UFC Submission of the Night): Antonio Rodrigo Nogueira vs Dave Herman gets three stars. Antonio Rodrigo ‘Minotauro’ Nogueira (33-7-1) entered as the No.8 heavyweight in the world while Dave Herman (21-4-0) entered as the No.49. Minotauro Nogueira vs Herman is on the undercard of Anderson Silva vs Stephan Bonnar – UFC 153. Watch the video! 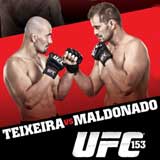 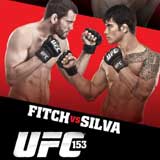 Review: 2012-10-13, great performance by both fighters and fantastic job on the ground: the fight between Jon Fitch and Erick Silva gets three stars (UFC Fight of the Night). The American Jon Fitch (23-4-1) entered as the No.12 welterweight in the world while Erick Silva (14-2-0) entered as the No.28. Fitch vs Silva is on the undercard of Anderson Silva vs Stephan Bonnar – UFC 153. Watch the video!

Review: 2012-10-13, the second fight between Phil Davis and Wagner Pradohas has not been particularly spectacular, we suggest you to watch only the (good) finish of the fight, two stars. Phil Davis ranked as the No.10 light heavyweight in the world, entered the fight with a record of 9-1-0 while the undfeated Wagner Prado had a record of 8-0-0. Their first fight ended by no contest due to an accidental eye poke (August 4th, 2012), Davis vs Prado 2 is on the undercard of Anderson Silva vs Stephan Bonnar – UFC 153. Watch the video!

Review: 2012-10-13, pretty good fight between Rony ‘Jason’ Mariano Bezerra and Sam Sicilia but it is not enough to get three stars (UFC Knockout of the Night). Rony Mariano Bezerra entered the fight with a record of 11-3-0 while Sam Sicilia had a record of 11-1-0. Rony Jason vs Sicilia is on the undercard of Anderson Silva vs Stephan Bonnar – UFC 153. Watch the video!

No incidents at Friday’s official weigh-in at HSBC Arena in Rio de Janeiro for UFC 153. UFC middleweight champion Anderson Silva came in at 202 pounds, and veteran fighter Stephan Bonnar meet was 202 pounds.
In the co-main event, Antonio Rodrigo ‘Minotauro’ Nogueira (244) and Dave Herman (243) were just a pound apart for their heavyweight bout.
Silva comes from a streak of 16 consecutive victories, 14 of them finishes. His last match was at UFC 148 in July, when he defeated Chael Sonnen by technical knockout at the MGM Grand Garden Arena in Las Vegas (= Silva vs Sonnen 2). Silva has secured 25 of his 32 professional wins by knockout, technical knockout or submission, including Rich Franklin (twice) and Dan Henderson, Vitor Belfort, Forrest Griffin and Nate Marquardt. Undefeated inside the Octagon, he has not been legitimately defeated since the incredible Ryo Chonan’s flying scissor heel hook in December 2004 (video at the bottom of this post),