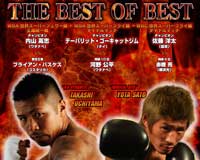 Review: 2012-12-31, pretty good fight with an exciting eighth round: the fight between Takashi Uchiyama and Bryan Vasquez gets three stars. Both undefeated, the Japanese Takashi Uchiyama (18-0-1) entered as the No.2 super featherweight in the world while Bryan Vasquez (29-0-0) entered as the No.10. Uchiyama vs Vasquez is valid for the WBA World super featherweight title. Watch the video!