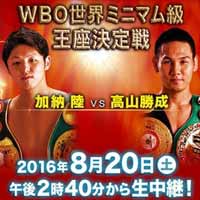 Review by AllTheBestFights.com: 2016-08-20, good fight between Katsunari Takayama and Riku Kano: it gets three stars.

The former Wbc, Ibf and Wbo champion Katsunari Takayama entered this fight with a pro boxing record of 30-8-0 (12 knockouts) and he is ranked as the No.6 minimumweight in the world (currently the #1 in this division is Wanheng Menayothin). He fought three times last year beating Fahlan Sakkreerin Jr (=Takayama vs Sakkreerin Jr) and Ryuji Hara (=Takayama vs Hara) but then he lost to Jose Argumedo (=Takayama vs Argumedo).
His opponent, the 18-year-old Riku Kano (15 years younger than Takayama), has a record of 10-1-1 (5 knockouts) and he entered as the No.16 in the same weight class. He suffered his only loss at his professional boxing debut in 2013, against Benjie Bartolome (via split decision), since then he has collected ten victories and one draw. Takayama vs Kano is valid for the vacant WBO World minimumweight title. Watch the video and rate this fight!

Report broken video
« 2016 MMA fight – Nate Diaz vs Conor McGregor 2 – full fight Video UFC 202
2016 BOXING fight – Jarrell Miller vs Fred Kassi – full fight Video »
HELP US!!! Since the CORONAVIRUS pandemic started, AllTheBestFights.com has struggled to survive! If you have enjoyed this website for the past 10 years, today we ask you for a little help: