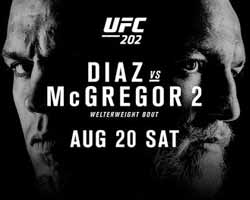 Review by AllTheBestFights.com: 2016-08-20, close fight with some nice exchanges: Conor McGregor vs Nate Diaz 2 gets three stars (UFC Fight of the Night).

The black belt in Brazilian jiu-jitsu and Tuf 5 Lw tournament winner Nate Diaz entered this fight with a professional mma record of 19-10-0 (84% finishing rate) and he is ranked as the No.3 lightweight in the world (currently the #1 in this division is Eddie Alvarez). He suffered his last loss when he faced Rafael dos Anjos in 2014 (=Dos Anjos vs Diaz), after this bout he beat Michael Johnson in 2015 (=Johnson vs Diaz) and Conor McGregor in 2016 (4-stars-fight, McGregor vs Diaz I).
His opponent, the current Ufc Fw champion Conor McGregor, has an official record of 19-3-0 (95% finishing rate) and he entered as the No.1 featherweight. Before the loss suffered against Diaz in March, ‘The Notorius’ had fought three times in 2015 winning over Dennis Siver (=McGregor vs Siver), Chad Mendes (=Mendes vs McGregor) and Jose Aldo (4-stars-fight, Aldo vs McGregor). Diaz vs McGregor 2 is the main event of the UFC 202. Watch the video and rate this fight!

Their previous fight: Conor McGregor vs Nate Diaz I