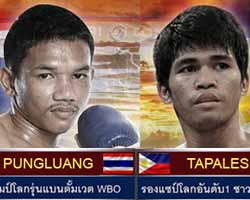 The Wbo champion Pungluang Sor Singyu entered this fight with a professional boxing record of 52-3-0 (35 knockouts) and he is ranked as the No.8 bantamweight in the world (currently the #1 in this division is Shinsuke Yamanaka). He suffered his last loss when he faced Tomoki Kameda in 2014, after this bout he has collected six consecutive victories beating Jetro Pabustan in 2016 (=Sor Singyu vs Pabustan).
His opponent, Marlon Tapales, has an official record of 28-2-0 (11 knockouts) and he entered as the No.6 in the same weight class. He lost to David Sanchez in 2013 but since then he has won seven fights defeating Jecker Buhawe and Shohei Omori in 2015 (=Omori vs Tapales). Singyu vs Tapales is valid for the WBO World bantamweight title. Watch the video and rate this fight!