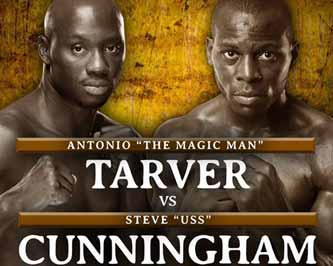 Review by AllTheBestFights.com: 2015-08-14, disappointing fight between Antonio Tarver and Steve Cunningham: it gets two stars.

The former light-heavyweight world champion Antonio Tarver (he is 46 years old, seven years older than Cunningham) entered this fight with a professional boxing record of 31-6-0 (22 knockouts) and he is ranked as the No.8 heavyweight in the world (currently the #1 in this division is Wladimir Klitschko). He suffered his last defeat in 2009 when he faced Chad Dawson, since then he has collected four victories and one no-contest; he fought just once in 2014 beating Johnathon Banks (=Tarver vs Banks).
His opponent, the former Ibf cruiserweight champion Steve Cunningham, has a record of 28-7-0 (13 knockouts) and he entered as the No.13 in the same weight class but he comes off the loss against Vyacheslav Glazkov (=Glazkov vs Cunningham). Tarver vs Cunningham is the main event of the evening. Watch the video and rate this fight!