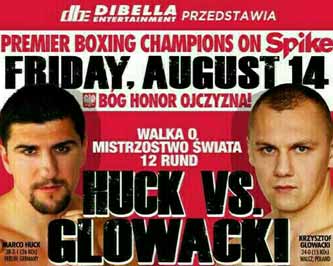 Review by AllTheBestFights.com: 2015-08-14, great fight with some tremendous exchanges and a spectacular finish: Marco Huck vs Krzysztof Glowacki is very close to get four stars!

Marco Huck entered this fight with a pro boxing record of 38-2-1 (26 knockouts) and he is ranked as the No.5 cruiserweight in the world (currently the #1 in this division is Grigory Drozd). He suffered his last loss in 2012 when he faced Alexander Povetkin (by majority decision, Povetkin vs Huck), since then he has collected one draw and four victories winning over Mirko Larghetti in his last bout (=Huck vs Larghetti).
His opponent, the undefeated Krzysztof Glowacki, has a perfect record of 24-0-0 (15 knockouts) and he entered as the No.14 in the same weight class. He has already fought once in 2015 beating Nuri Seferi (=Glowacki vs Seferi). Huck vs Glowacki is valid for the WBO World cruiserweight title (held by Huck); undercard of Antonio Tarver vs Steve Cunningham. Watch the video and rate this fight!